Reasons for Okada bans in Lagos 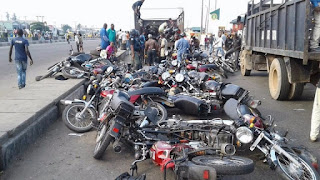 Following the ban of commercial motorcycles (Okada) and tricycles (Keke Napep) in Lagos state, Governor Babajide Sanwo-Olu-led administration has revealed why the decision was taken.

Recall that the ban was announced on Monday, January 27, by the state government and it takes effect from today, February 1.

The Herald gathered that the government lamented that youths are no longer interested in trades like tailoring, bricklaying, printing, painting and others.

According to Sanwo-Olu-led administration, “Now we get artisans from neighbouring countries. Okada is not an enduring trade. The picture is horrible, bloody and scary. The government will not stand by and watch this bloody encounters to continue.

“Besides, the security of lives of Lagosians are of paramount interest to the Governor Babajide Sanwo-Olu’s administration. This is why it is moving to stop this fast slide into lawlessness.

“The government has programmes for the unemployed. The Lagos State Employment Trust Fund ( LSETF), is very active, helping many to set up their businesses with cheap funds.

“The Ministry of Women Affairs and Poverty Alleviation (WAPA) has also been doing so much training young women in various trades and giving them some money to set up. Civic Engagement has empowered many to start small scale businesses.”

“Okada has been used by criminals to rob and terrorise innocent citizens. Police figures are scary. When it was banned in Kano and Edo, for instance, crime rates dropped. The law enforcement agencies are ready to fix anybody who wants to take to crime because he has lost his Okada job.”
By Shittu Baraka on February 01, 2020