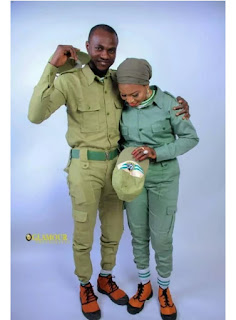 Two serving corps members identified as Mohammed Alhaji-Musa and Hauwa Yahaya-Bagudu who began a romantic relationship after meeting in NYSC's 2019 Batch 'A' Orientation Course have tied the nuptial knots.

The couple got married on Friday February 7, at the Nigeria Air Force Base Central Mosque in Kano. A major highlight of the event was the couple exchanging their marital vows in NYSC uniform.

He commended the new couple for maintaing their relationship which blossomed into marriage and fulfilling one of the objectives of the NYSC Scheme which is to achieve national unity and integration.
The bride is from Niger State while the groom is an indigene of Nasarawa State.
He said;
“We met in camp during our platoon activities, especially the day we met during our platoon duty in the kitchen.

“Since then love took hold of me like breeze from nowhere. I was overwhelmed by her kindness and the kind of hospitality I received the first day I went to their house”.
On her own part, Hauwa said she never wanted to serve in Kano. She added that her deployment to the state has now turned out to be a huge blessing to her.
The graduate of I.B.B University in Lapai, Niger State said;
 
“Today I thank God because my being here has turned out to be a blessing”.
Kano state NYSC coordinator, Mal. Baba Ladan who confirmed the couple’s marriage said he now looks at them as role models for others. 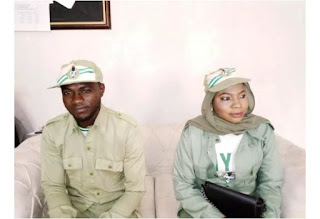 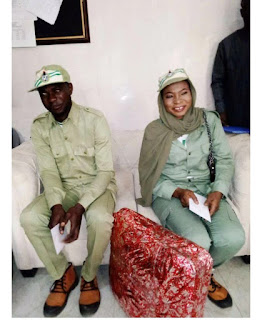 Ladan said;
“l look at them as role models to other corps members that will start a relationship that will also end into a marriage”.

The serving corps members’ wedding fatiha will hold on Friday, February 7, at the Nigeria Air Force Base Central Mosque in Kano by 1:30 pm.